Hillary “Killary” the Killdabeast Clinton was in Iowa Sunday for the first time in nearly seven years. Naturally the media was orgasmic.

One reporter tweeted: “So much press at Harkin Steak Fry that they ran out of press passes.” Fortunately a few real reporters still exist in this country, Sharyl Attkisson being one of them.

Her article today is titled: “Benghazi Bombshell: Clinton State Department Official Reveals Details of Alleged Document Review” And bombshell it is, as Attkisson writes that Raymond Maxwell, a former State Dept. official, is alleging that State Dept. employees were ordered to remove any damaging Benghazi related documents before handing the papers over to the Accountability Review Board. 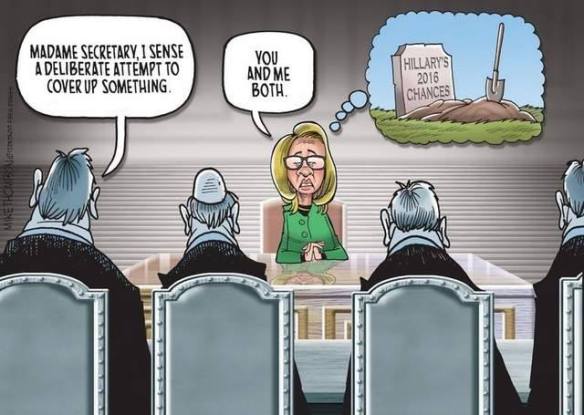 Overseeing the process were “close confidantes” of Clinton. But all this matters little to the fawning reporters who were in in Iowa. Some took “fun photos” of Hillary proudly grilling a steak. Actually pretending to grill a steak, it was pre-cooked and provided to her beforehand.

Clinton to the “Harkin Steak Fry” attendees: “I’m back!” Yes you are Hillary … like herpes.

Meanwhile, the following is directed ONLY to the pond scum who just beheaded their third Westerner: “Dear Young Men of ISIS: Let’s face it, not much manhood on display when you’re beheading unarmed victims with their hands tied behind their backs. May we suggest athletics? You know where there is actual competition.

Your part of the world could certainly use your help, at the 2004 Olympics the 57 Muslim countries took home only 13 gold medals. Heck, Australia won more (17) with about 1% of the population. Or ISIS you may wish to show everyone your remarkable abilities in science & technology.

Your ancestors achieved great things within these fields … 1000 years ago! So instead of focusing on cutting off heads & sterilizing women, with study & hard work ISIS you could double the number of Nobel Science Prizes ever awarded to people of your faith. Shouldn’t be too difficult with the current total at TWO.

Finally, please clear something up … is it ISIS or ISIL? Doesn’t really matter, to the civilized world you filthy animals are known only as LOSERS.” 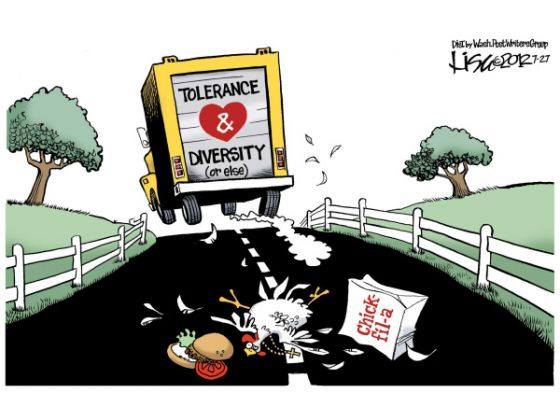 The principal at Ventura (California) High School banned a booster club from selling donated Chick-fil-A meals at a fundraiser. She doesn’t like the Cathy family’s support of traditional marriage.

One student said the mere exposure to these meals would make some schoolmates feel “kind of weird.”

Yet the Ventura school district has gladly accepted $21K from the local Chick-fil-A in the past, so it’s cash YES, chicken sandwiches NO. Franchise owner Robert Shaffer: “Chick-fil-A doesn’t have a stance on gay marriage. We treat everyone who walks through our doors, regardless of their religion or sexual orientation, with honor, dignity and respect.”

But School Supt. Trudy Arriaga agreed with the ban: “We value inclusivity and diversity on our campus and all of our events and activities are going to adhere to our mission.” Sure you do sweetie pie so if Starbucks, a supporter of gay marriage, offered free coffee you’d turn that down too, right?

After all some students might feel “kind of weird.” How’s that lib motto go?

Oh right, “Tolerance for me … but none for thee!”

I am willing to bet that you thought the bombing of Pearl Harbor by the Imperial Japanese Navy in 1941 was an act of war.

Nope, for John Kerry & Susan Rice this was simply Japan engaging in a little “counter-terrorism operation.”

This is great news for Repubs … no more “War on Women,” from now on it’s called “counter-terrorism.” Ironically though, the WA Post reported yesterday that their new poll shows it’s O who’s tanking with the fairer sex (as well as young people & Latinos).

Karlene Richardson: “Honestly, I just feel that what I bought into is not what I’m getting. I’m starting to wonder whether the world takes us seriously.” Well Karlene, it’s Obots like you who fell for it TWICE who shouldn’t be “taken seriously.” We all know Karlene (and millions like her) will still enthusiastically vote for Hillary … after all old Hil’s got all the “right parts.” For America’s survival what we really need is a “War on Low Info Voters!” 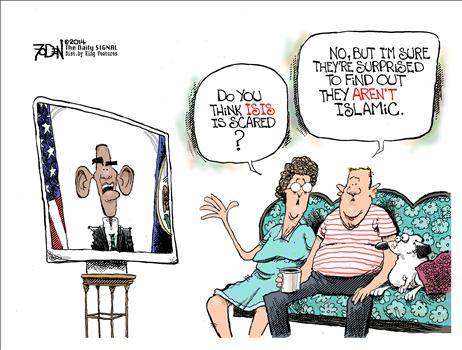 Last week, Katie Pavlich at Townhall writes that although “ISIL and ISIS literally stands for Islamic State,”  despite the fact that Zerobama in his recently broadcast prime time speech (and even before that) insisted: “ISIL is not Islamic.”

Pavlich: “If we aren’t willing to see our enemy for what they are, radical Islamic terrorists, we can’t defeat them. Using political correctness to define ISIS helps no one, including millions of peaceful Muslims all around the world.”

According to the “smartest president ever” all “not Islamic.” Someone please wake up King Putt and tell him that none of these acts were committed by “radical Christians” or “radical Buddhists.”

In review – per my September 10th tweet regarding at that timethe latest NBC/WSJ poll that shows only 1 in 3 now support President Obama’s handling of foreign policy – (32% approve, 62% disapprove)…

In light of this not-so-amazing btg of polling info, what Zerobama should have said during his BIG SPEECH on ISIS last week was: “Fellow Americans, I’m truly sorry. Sorry for: a) The Russia “reset button” b) My Latin America apology tour c) My Cairo speech d) Ignoring the Iranian freedom movement e) Scrapping the Eastern European missile defense system f) Banning the words “radical Islam” & labeling the Hasan murders as “workplace violence” g) Rejecting the advice of my military advisors by pulling ALL troops from Iraq) h) Supporting the Egyptian Muslim Brotherhood i) Libya/Benghazi j) My promise to Russia to be “more flexible” after my re-election k) My empty Syrian “red line” threat l) Ignoring the CIA warnings about ISIS for more than a year, instead calling ISIS the JV & m) The border So to future presidents wishing foreign policy success: Piece of cake! Just study all that I’ve ever done … and do exactly the opposite.”

But then again, it was a lot to HOPE for that this lousy administration would ever CHANGE.